The Universe is a Green Dragon

Due to the generosity of Bruce Bochte and Linda Bochte, I was able to spend an entire year in New York City in conversation with Thomas Berry. I relate the story of these conversations in the second part of my book Cosmogenesis, including the two day sprint of non-stop writing when I crammed everything I’d learned from Thomas into a stack of pages filled with my indecipherable scrawl. After receiving Thomas’s general approval, I worked on the manuscript throughout the next year and sent it to Bear and Co., who published a paperback edition in 1984.

I can still remember the relief I felt when I held the first copy of the book in my hands. Thomas Berry’s vision could now move out from his small group of students to the wider world, even the entire planet.

It took five years of listening and thinking and writing to reach this moment of fulfillment. I had found his article in 1979 in the make-shift library of the Chinook Learning Community on Whidbey Island. “The New Cosmic Story” set me on the path for becoming a cosmic story teller even before I had any clear awareness of what I was about. The actual ignition point came at the end of my time with Thomas. Perhaps it was the nearness of my departure that enabled me to take his words all the way in. We were at our usual eating place, the Broadway Diner, and I was halfway through my Greek salad. Suddenly he stared at me, eyebrows tightened as if he were cross about something I had done or failed to do. 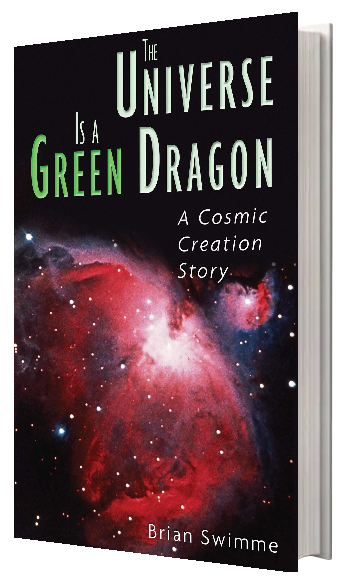 “You scientists,” he said, “have this stupendous story of the universe. It breaks outside all previous cosmologies. But so long as you persist in understanding it solely from a quantitative mode, you fail to appreciate its significance. You fail to hear its music. That’s what spiritual traditions can provide. Tell the story, but tell it with a feel for its music.”

The sound of his voice, all by itself, changed my life forever. It was as if someone had taught the Rocky Mountains to speak English.